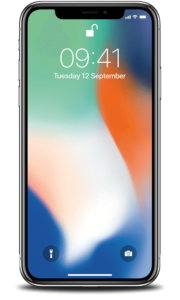 The Apple iPhone X was recently released in a keynote event, showcasing its features in usual Apple style. There was a large press conference and they displayed and demonstrated all the next generation Apple products. There were mixed reactions across the board regarding their latest iteration the iPhone X.Deviating from the previous iPhones, the iPhone X has an edge to edge OLED display as well as no home button. Instead, the phone will be unlocked through facial recognition (we’ll get to this later). Another new added feature to the new iPhone X is Qi wireless charging.

We think having Qi Wireless Charging in the new iPhoneX is a great addition. The option to charge wireless or to charge through a cable means that iPhone users will finally have the flexibility to choose. This is long overdue and it appears Apple has come around to appreciate this technology.
The Bad:

Touch ID is a great feature for any smartphone. It’s fast, convenient as only one motion is required to unlock your phone. The loss of this feature for the iPhone X is horrible to say the least. The facial recognition unlocking feature looks tacky and over the top. Completely unnecessary coming from a company that usually takes pride in minimalist designs.

Apple Australia also has released local pricing of the devices. The iPhone X will cost $1579 for64GB, or $1829 for one with 256GB of storage. They will be available in silver and space grey. They can be ordered from October 27 and Apple says it will be on sale from November 3.

The user interface has changed as well for this model. Users of the iPhone X will need to learn how to communicate to their iPhone X as there is no longer a home button. We predict there may be a push back to the loss of the home button as it does not have any virtual keys like most Android phones do. Andrew Freeman, a writer from Tomsguide.com wrote that it will be easy to get used to the buttonless iPhone X.

Recently, it has been surfacing that the Apple iPhone X has been suffering from manufacturing issues. The Romeo & Juliet modules required for facial recognition are reportedly taking too long to manufacture, potentially causing a bottle neck of supply. This may mean that most people will have to wait longer until they can buy the iPhone X.

Overall, we don’t think that this phone will be flop. It has some amazing hardware and change is always strange at first. Perhaps in a few years time, it will be said that the iPhone X was the beginning of the next way of smartphones.